Rashi shadastak is a very old concept taught in the basics of astrology. It is used in checking compatibility between bride and groom and can be extended to check your relationship with everyone in your life including your friends, colleagues, co-workers, boss, in-laws, siblings, parents. The term “Rashi Shadastak” refers to placement of two zodiac signs in 6th and 8th position counting from each other. 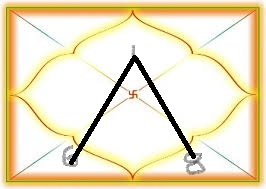 The term “Shad/Astak” means “6/8”. It is interesting to note that there are 2 types of Rashi shadastak :-

The image on the left indicates rashi shadastak taking 1 (Aries) as reference point and counting 6th and 8th house/sign from it. Do the Counting again till Aries from 6th and 8th sign/house.

In Preeti Shadastak both zodiac signs are either ruled by same planets or rashi lords are friendly planets. This promotes harmony in their relationship inspite of having many differences. They still get attracted to each other in the long run.

Zodiac Signs that make Preeti Shadastak yoga are as follows :-

Zodiac Signs that make Mrityu shadastak yoga are as follows :-

From the above table it is clear that :-

What is the difference between Preeti Shadastak and Mrityu shadastak?

Preeti shadastak is shadastaka of signs whose lords are friendly to each other or both signs are owned by same planet. It promotes love and well being inspite of having many differences with each other. These people can be friends as there fights and differences mellow down due to their attraction for each other.

Mrityu Shadastak is shadastaka of signs whose lords are worse enemies of each other. These people will feel strained and suffocated in a relationship in the long run. The initial attraction and love fades away with time bringing a lot of stress in relationships. It kills the relationship between two people in the long run.

Absolutely not, the word Mrityu indicates death of the relationship due to stress, fights and lots of differences in the long run. They began to despise each other and develop hatred at some point if there are other extreme combinations in the horoscope. Their relationships turn sour due to incompatibility between them which kills it.

Even in general relationships you will realize that you do not get along with certain people inspite of trying very hard for it. There are a lot of differences between the two people which does not let them have a harmonious relationship, they might began as best friends but end as worse enemies of each other. This happens in mrityushadastaka.

Loose interpretation of astrological sutras leads to spreading such fears and rumors in the society. Mrityushadastaka does not kill anyone but spoils the relationship resulting in death of the relationship between two people as things reach beyond tolerable levels for both at some point.

Rashi shadastak is not a dosha. There are no remedies for Rashi shadastak, it is just that the mental make up of two people is not compatible for each other. If the promise of marriage and married life is good in the horoscope there won’t be severe issues in the relationships. There will be friction and stress in relationships leading to no attraction and love between the two people if bad planetary combinations are there in the horoscope. Some people just live with each other for entire life inspite of having no compatibility, no respect, no attraction for each other, they can be an example of mrityu shadastak.

Conclusion:- Rashi shadastak does not cause death. Signs having Preeti Shadastaka can marry each other. Signs having Mrityu shadastaka should possibly avoid tying the wedding knot. Complete horoscope analysis should be done before reaching any conclusion. Other supportive planetary position do make an impact and even rashi shadastak people can share good relationships.