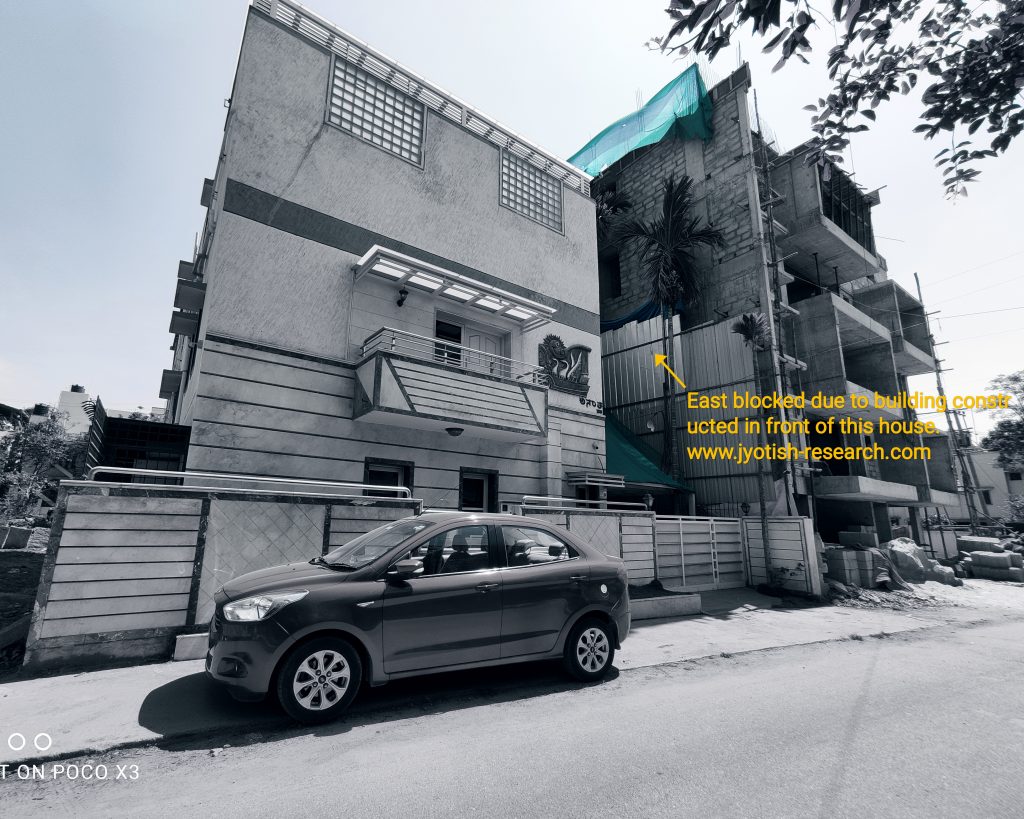 This is not a typical post talking about Vastu defects in the East. I am posting a case below which is a common problem highly ignored. I reside in Bangalore and have been observing the construction of independent houses even though people construct houses with East/North facing they main thing they tend to ignore is the “Vedha”.

The houses are constructed so close to each other that there is hardly a space of 2-3 feet between two houses, the windows or doors even if posited in the East or North are blocked by the other house in proximity. The result is North and East directions are blocked causing Vedha.

The above situation happens when you construct a house occupying the entire plot leaving no space within the plot itself. The house construction should be planned in such a manner that it should leave a lot of space between two houses and the best way to construct such a house is to leave open space in the plot itself from all 4 sides or atleast on the North and the East side assuming that someone will construct a house on a plot next to yours in few years if it is empty.

Vastu Defects in the East.

The above house was a perfect North Facing house with all 4 directions open until recently a building construction came up and blocked the entire East direction of this house. The building as you can see is so closely connected with the house hardly leaving any scope for light to enter from the East. Another noticeable thing is the height of this building is more than the house causing a clear Vedha.

When your East is blocked, the direct sunlight coming to your house gets blocked. The positive energy flow from East to West is blocked triggering series of problems slowly.

What can be done in such situation like above?

Nothing can be done after the house has been constructed, this kind of situations cannot be reversed. The remedies done will have very minimum effects or can at maximum protect you to some extent from the damage to be caused.

The best way to avoid such problems is to plan a house on a plot in such a way that all the 4 directions get enough breathing space, mainly the East and the North of the plot should have more open space to minimize such doshas arising in future or atleast buy a house which has Road adjacent to the North and the East which will ensure that there is no construction close enough to block the energy flow from East and the North to your house.

Remedies for Vastu Defects in the East.

If you have experienced problems due to a construction of other property completely blocking yours, you can write to me with photos and describe the problems you have started facing since the construction of the other property begun. It will serve as perfect case-study and be helpful for our readers to read such feedbacks showing the accuracy of Vastu Shastra.

If you like this article Vastu defects in the East, feel free to give a share within your Social Network.