After reading so many numerous books on vastu I was not convinced with what I found in them, these were the latest books written in recent 100 years all by so called famous vastu consultant, I was always under the impression that there is no classical literature on vastu shastra and it is bogus until I read about Shri Y.N Maggirwar who literally exposed the world to the classical literature of vastu.

I am into astrology from so many years but did not undertake any course or practice vastu until I was sure about its authenticity and its mention in our vedic lore. I have always been of the opinion that you meet the right people at the right time. It is really strange for a person like me to be ignorant of such a sea of classical literature in vastu shastra especially when I was interested in occult since my childhood days. Vastu is known as the Upa-veda like jyotisha is known as the Vedanga-Eye of the vedas.

I am now under the dasha of jupiter and the antardasha of Venus for tula lagna which has brought a huge sudden transformation in my life in past 2 years which is extremely positive(8th house/lord brings transformation). Both these planets are the givers of knowledge and one placed in the 5th house of my horoscope whereas other in the 10th under parivartana yoga of 8th house with 10th lord Moon. The gajakesari yoga in my horoscope from moon and the amala yoga in horoscope having benefics in both 10th house from lagna and moon does make me take righteous way and avoid doing consulting like quacks. The magic of this dasha, antardasha period is that I have found teachers on both jyotish and vastu who have taught the meaning of both as per shastra. 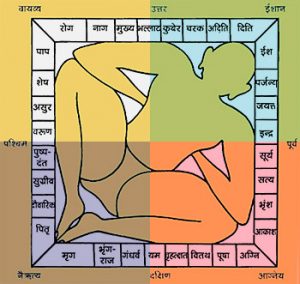 I wished to learn Vastu from him and fortunately I found Dr. Dhundiraj pathak sir who is a very renowned name in field of vastu and a student of Shri Y.N Maggirwar sir. I had the pleasure to learn about Vastu shastra from Dr. Pathak as given in the classical texts, I am totally indebted to these people who have brought in light to the world the unexplored literature on vastu and revealed how much our Indian Sage/Rishees have left for us, that which is studied and copied all over the world is unknown to our own country from where it originated. There are so many classical literature on vastu even more than astrology which was a shocking revelation to me and I could see many of those books first hand in custody of them which convinced me that vastu shastra is not a joke.

One thing I learned in Vastu is that your life can improve with improvement in your vastu, the planetary position in the horoscope is fixed at time of your birth and you cannot change those energies but the energy of your vastu is in your hand and you can change it provided there is a good promise of vastu in your destiny.  After Learning I applied the same principles to my house and found them working after comparing my previous and present vastu. We were shown numerous case studies collected over 25 years by our teacher to show how a bad vastu can create havoc and how changes done in vastu bring about a transformation in life of people, There were cases where we learnt that if things are not in destiny the person will not be able to do the remedies even if they are simple and priceless, and on other hand the costliest remedies are done if there is a good promise, needless to say results were shown in both cases.

Most surprising was the fact that there is more literature on vastu scattered in many of our puranas and also exhaustive list of books written by our sages exclusively on vastu shastra which is also being translated by Foreigners now as they have realized the importance of our culture and classical texts, they conduct more researches and studies more than done in our country which is a shame for us. Various books like Vishwakarma prakash, Mayamatam and Samarangana Sutradhar give excellent information about vastu shastra in real sense as compared to the bogus vastu shastra propogated by today’s so called experts and quacks in this field.