Importance of Ascendant lord in horoscope

Importance of ascendant lord in horoscope

Let us take a look at the horoscope of the living Legendary Actor Shri. Amitabh Bachchan, He has been regarded as one of the greatest and most influential actors in the history of Indian Cinema. The horoscope of the Shri Amitabh Harivansh Bachchan is as follows :- 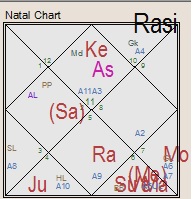 Importance of ascendant lord in horoscope

If you take a look at the horoscope from the ascendent you see a cluster of planets in the 8th house and the placement of Rahu/Ketu axis along the ascendent with aspect of saturn making the ascendent weak. The debilitation of Venus should also be noted but he has emerged as one of the strongest and the greatest actors Indian Cinema ever produced. What is the reason for this ? The weakness of venus and cluster of planets in the 8th sure gave him huge financial set-backs and ups and downs in his career as well as severe health issues and accidents, but the amount of success and a career in acting is not so clear from the ascendant chart, now turn the horoscope from the ascendant lord making tauras as the lagna, the picture becomes more clear. This is a classic example of checking the Importance of ascendant lord in horoscope.

There are 4 planets in the 5th house of the horoscope from tauras which include venus, mercury and mars which can give great acting skills and 5th house shows acting, entertainment , The sun is the natural karaka of the 5th house and also the chara atmakaraka placed in 5th from the ascendant lord. There are many dhanayogas operating from the 5th house of the horoscope from ascendant lord. Moon falling in the 6th house and the debilitation of the 6th lord in 5th with mars indicates the famous accident when he got injury in stomach and was in critical condition. 3,6,10,11 from the ascendent lord has a afflicted vasumati yoga having 2 benefics in the 3,6 house and aspect of two benefics on the 11th house from ascendent lord. All benefics are connected to 3,6,10,11 houses. This horoscope is a clear and easiest example of importance of ascendant lord in horoscope. The horoscope has ascendant lord placed in the 4th house representing mother who had a great influence on him in choice of career and wanted him to take a “center stage in life”, The placement of ascendant lord in sign “Tauras” the natural zodiac of 2nd house has also made him famous due to his voice and he has also been a narrator, playback singer and presenter for numerous programs, 4th house also represents the homeland and throne in politics, he has also been into politics, though saturn as the ascendant lord has often given him disappointments in the initial attempts in anything he pursued. The favorable placement of planets from the ascendant lord has made a big positive impact on the horoscope and given him huge success and fame in his chosen field which is why I have always stressed on the Importance of ascendant lord in horoscope. The ascendant lord in this case is retrograde as well due to which there was a delay in his rise and he also had to face many ups and downs in his lifetime, the retrogression of ascendant lord gives chestabala to it and also creates reversal of fortunes or sudden fall in life. It will give different personality traits and induce some weird results related to its lordships and karakatwa.